The three most powerful mining dump trucks in the world today

With a payload capacity of 496 tons, Belaz 75710 is the world's largest mining dump truck. Belarus of Belarus launched an ultra-heavy dump truck in October 2013 at the request of a Russian mining company. The Belaz 75710 truck is scheduled to go on sale in 2014. The truck is 20.6m long, 8.26m high, and 9.87m wide. The empty weight of the vehicle is 360 tons. Belaz 75710 has eight Michelin large tubeless pneumatic tires and two 16-cylinder turbocharged diesel engines. The power output of each engine is 2,300 horsepower. The vehicle uses an electromechanical transmission driven by alternating current. The truck has a top speed of 64 km/h, and it has the capacity to transport 496 tons of payload.

Caterpillar 797F is the latest model of 797 dump truck manufactured and developed by Caterpillar, and it is the second largest mining dump truck in the world. The truck has been in service since 2009. Compared with the previous model 797B and the first generation 797, it can carry 400 tons of payload. It has a total operating weight of 687.5 tons, a length of 15.1m, a height of 7.7m, and a width of 9.5m. It is equipped with six Michelin XDR or Bridgestone VRDP radial tires and a 106-liter Cat C175-20 four-stroke turbocharged diesel engine. The truck uses a torque converter transmission with a top speed of 68km/h. 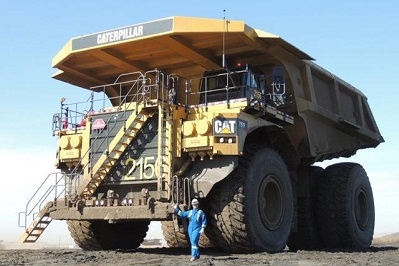 The Komatsu 980E-4 launched by Komatsu America in September 2016 has a payload capacity of 400 tons. Komatsu 980E-4 is a perfect match for the 76m large-capacity bucket, suitable for large-scale mining operations. The total operating weight of the truck is 625 tons, the length is 15.72m, and the loading height and width are 7.09m and 10.01m, respectively. The car is powered by a four-stroke 3,500 horsepower diesel Komatsu SSDA18V170 engine with 18 V-cylinders. It uses GE Double Insulated Gate Bipolar Transistor (IGBT) AC drive system and can run at speeds up to 61km/h. Previous:Components of electric minivan
Next:What is a mini truck